Many people move to new homes where the previous owners or even the builders had planted fruit trees. In pre-war years there was often an emphasis on providing new homeowners with two fruit trees – an eating apple and a cooking apple. The reality is that these trees usually get left unpruned or get hacked about as the garden owners have no time or knowledge to manage the trees. The results of this neglect are either small trees, part dying through branch suffocation or large, unfruitful trees that are completely out of control and are an unsightly mess. And, of course, quite a few gardeners plant fruit trees themselves only to lose control of them very quickly…. this is where I often take over as much of my business nowadays involves restoring old orchards and garden grown fruit trees.

In most situations these neglected trees can be brought back to a more manageable and usable condition and the way to do this is through careful and properly selected pruning. Apple and pear trees are most easily renovated and will usually survive the most severe cutting back. Cherries and plums can also be renovated, but to a lesser degree and with less success. I do not recommend trying to restore apricots, nectarines and peaches as they do not respond well and to be honest it may be better removing them completely and starting again in a different place.

Having said that, before any renovation works are commenced several things should be considered for each tree to initially decide if it is worth saving: 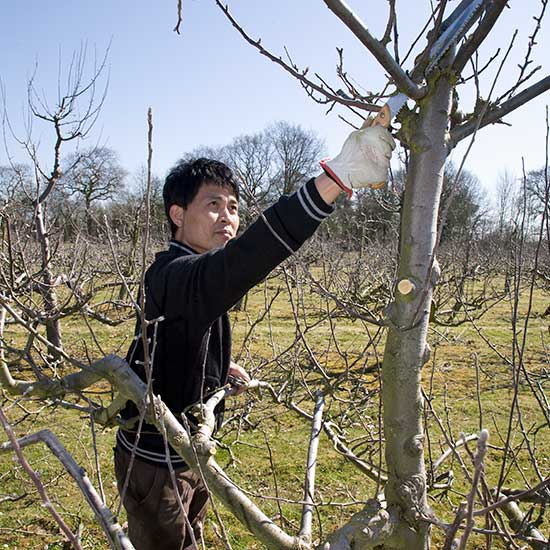 Apple trees are best restored during the winter months of January to March.

Once the initial analysis has been made a more detailed examination of each tree selected for retention needs to be undertaken. First of all, have a good look at the tree’s trunk and the ends of each of the major branches. Each should be in a reasonably sound condition and free from large areas of dead wood on which the bark has died and maybe fallen off. Although the majority of the tree’s trunk and parts of the major branches are simply conduits for water and nutrients they do provide the structural framework for the entire tree which means that if the trunk and parts of the major branches are hollow, efforts to save the tree will most likely end up being unsuccessful. Have a good look at the trunk and branches and see if you can identify any areas which look orangey-brown and scaly (caused by canker) as this can be an indication of poor health. If you have any doubt about the health or viability of any branch scrape back a little of the bark to see if you can find a bright green layer underneath. If this is not present or looking greenish-brown the trunk or branch is unfortunately in decline. Do not be too concerned about a number of dead smaller branches within the canopy of the tree as this is a natural shedding of old wood. Unfortunately, if this examination reveals serious structural and health problems you really have little choice but to remove the tree as its life is going to be very limited and it may become structurally unsafe.

So we now move on to the restoration of the tree. For apples and pears this is best done in the winter months of January to March as not only will the tree respond better by growing away in the spring but it will be far easier to see the tree’s branches without any leaves present. In the case of cherries and plums don’t start until the beginning of April when the sap starts rising again. The first task is to cut out all broken and dead branches and remove any suckers which may be growing around the base of the tree. Once this first part of the work has been undertaken, the structure of the tree can be more clearly observed.

The next (and probably most important) step to make is to decide how big you want the tree to be. However, it is important to recognise that final size will largely depend on what rootstock, if any, the tree was budded or grafted on. A seedling tree (i.e. one that is growing on its own roots) will never grow small unless regular, major surgery takes place, A tree grown on M9 or Pixy rootstock can be maintained at around 2-3m (6-10ft) tall, a tree grown on M26, MM106, Quince A, Quince C or St. Julien A at about 3 to 4 metres (10 to 16 feet) tall and a standard at about 4-6m (16-20ft) tall. Many experts recommend that trees that have not been pruned for a long time should not be cut back to the final height in a single session. This is based on the prevention of excessive growth and too much shock to the tree; if you go down this route you should plan on reducing tree height over a period of 3 years by removing no more than one third of the tree in one go. The other option is to follow my preferred method which is to reduce to the final height in one go. This method saves shocks to the tree over several years, prevents the tree from looking out of place in the interim and saves large bills to my clients! Over all the years that I have used this latter approach I have never lost a tree.

There are two strands of work to tackling the tree. The first strand is to remove congestion by thinning out excessive branches. This will largely be achieved by judiciously removing crossing, duplicate and inward growing branches. The second strand is to achieve height reduction and this involves lowering the height of the tree to branches growing as horizontal to the ground as possible but do not just cut out some major branches to achieve this. Once you have achieved the final height look closely at major branches to decide if they need cutting back to bring the tree’s shape into scale. Two things that you should not be doing during this process is indiscriminately cutting back branches or just cutting them all in half as many gardeners do.

During the first summer after the cutting back you will find a large number of ‘water’ shoots appearing. These shoots, are rapidly growing vegetative shoots that develop around pruning cuts and need to be removed. Do not cut them off but pull them off from June onwards when they are around 30cm (12in) long. You can keep doing this during the growing season as long as they remain supple and green. Stop when the base of the shoot becomes woody and does not easily pull off. Also during early summer, thin any fruits down to one per cluster (if you can reach them) and space the clusters about 15-22cm (6-9in) apart. This will give the tree a chance to respond to its surgery as well as producing some fruits.

During January to March of the following year, before growth begins, you will need to respond to the new growth that the tree has put on since the major work the year before. This time, however, you will be limiting the work to pruning out fruit bearing wood. Take time to look carefully at the tree. Noting that the best fruit grows on spurs that are two to three years old prune out any spurs that are of some age to allow the newer spurs to develop. As part of this exercise you may need to remove younger spurs as well to prevent overcrowding as it is essential that plenty of light can reach all fruit bearing wood to allow fruit buds to develop and harden and fruit to develop in the sun.

Whilst the above might have seemed very daunting I can assure you that it is not and that once you have tackled one tree you will be ready for the next. And remember you will save a lot of money if you can do this yourself!