Mycorrhizal fungi originated at least 460 million years ago and played a key role in the evolution of plant life as we know it. However it has only been over the last 20 years that gardeners have started to understand the important  role they play in healthy plant development and the ways in which they can be used to boost plant health and vitality.

What are mycorrhizal fungi?

The word mycorrhiza breaks down to ‘myco’ the Latin for fungal and ‘rhiza’ the Greek for root so a mycorrhiza is an association between a fungi and a root. Fungi which form this relationship are known as mycorrhizal fungi. This process is a symbiosis – the fungi  obtains carbon from the plant and in exchange provides water and nutrients from the soil to the plant’s roots. Over 80% of vascular plant species form mycorrhizal associations including all of the fruit plants we grow in our gardens.

The fungi is made up of long thin hyphae, these make contact with the root cells and then spread out into the surrounding soil in search of nutrients and water. There are two key types of mycorrhizal fungi:

•    Endomycorrhizal fungi – these types actually grow into the plant root cells to form their association. This type of fungi cannot be seen without magnification under a mycroscope. Endomycorrhizal fungi associate with almost all plant species from the smallest grasses to the tallest trees.

•    Ectomycorrhizal fungi – these grow around the outside of the roots forming a sheath. This type of mycorrhizal fungi predominantly associate with certain tree species such as pine and birch. 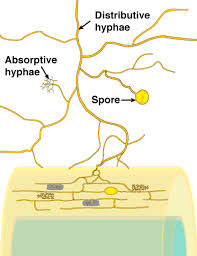 Endomycorrhiza growing into a root cell.

The benefits of mycorrhizal fungi

•    The fungal hyphae stretch out into the soil giving a much larger surface area to absorb water and nutrients such as potassium, nitrogen and zinc. This means lower fertiliser inputs are needed.

•    Protection from pathogens and herbivores due to the physical barrier of the fungi around the plant’s roots.

•    Protection from physical stress such as drought.

•    Soil stabilisation – the fungi produce a sticky protein called glomalin, this substance helps reduce erosion by stabilising soils. It is believed that over one third of global carbon is stored in this innocuous substance.

All of the fruit plants which are available to buy from Pomona Fruits will form relationships with mycorrhizal fungi. These fungi occur naturally in UK soils however growing practices and use of chemicals deplete the populations in soils. In addition to this, growing media such as coir (which is often used in strawberry and raspberry production) contains no natural biology.

As well as benefits such as reduced mortality and improved drought tolerance, a study carried out at East Malling Research in Kent found that bags of strawberry plants treated with rootgrow™ mycorrhizal fungi produced a statistically significantly higher fruit yield by weight than those plants which were not treated.

There is now an increasing trend in the use of  granular products such as rootgrow™ (used in the strawberry trial mentioned above) at time of planting. When placed in contact with the roots the fungi within the granules will colonise the plant in as little as 2 weeks, this process can take years if left to develop naturally.  Rootgrow™ is produced in the UK and contains UK origin fungi, the product is free from chemicals and can be used as part of an organic growing system.

Potted trees, shrubs and plug plants – place a scoop of rootgrow™ granules into the planting hole and back fill as normal.

Bare rooted trees and strawberries – either wet the roots and dip into the granules before planting, or use a product with a gel sachet included (rootgrow™ granules & gel or rootgrow™ professional). Mix the gel with water to produce a wallpaper paste like emulsion, mix the granules into the gel and dip the plant roots in – this ensures maximum contact between the roots and fungi.

2 thoughts on “The Benefits of using Mycorrhizal Fungi when Planting”