With the onset of autumn we can now turn our minds to what new apple and pear trees to plant during the coming winter. This is always an exciting time as there is so much to go and see and taste which will help decision making. All around the country in October there are “Apple Days” at which apples and pears will be available to taste and as these are relatively long term investments it is well worth the research.

Growing apples and pears in gardens is easy and is becoming increasingly popular and the principal reason for this is that these fruits are now so simple to grow on dwarfing rootstocks which means that they can be managed easily and several varieties can now be grown in a very small space. It is even possible to grow a collection of fruit trees in pots on the patio!

Recent fruit breeding has produced a number of reliable and disease resistant trees which has meant that the days of apple trees like ‘Cox’s Orange Pippin’ which spend most of their life covered with mildew, scab and goodness knows what no longer need be grown. Gone are the days of spraying everything that moves out of sight which not only destroys the environment but is also very hard on the pocket! There are plenty of modern apples (even Cox-like apples) such as ‘Fiesta’ which grow easily and are relatively disease free.

So where do we start? Well first of all you need to decide how you want to grow your trees. In the majority of gardens the best way of growing fruit trees are as cordons or dwarf bushes both of these forms being easily manageable. As cordons can be grown as little as 30 inches apart you can grow several in a fairly small space. I suggest that you use the rootstock M26 or MM106 For pears specify either Quince A or Quince C rootstocks.

Dwarf bushes are best grown on the rootstock M26 which will allow you to plant the trees at 8 to 10 feet apart but in light or shallow soil I would suggest that you use the rootstock MM106 which is a little stronger – you will need to plant at 10 to 12 feet. I have not mentioned the rootstocks M9 or M27 as they are only suitable for the best soils and very few have of us have that! If you do chose to experiment with one of these rootstocks note that the trees will need permanent staking and in the first growing season plenty of watering.

As mentioned earlier you can grow apple trees in pots and although it is possible to grow bush trees quite well I would suggest that if this is the way of growing that you wish to follow you consider using vertical cordons. Remember though that you will need to water these pots very regularly in dry weather.

So moving on to the best varieties to grow and I’m going to recommend varieties which grow well and without the need for spraying anything. Firstly you need to consider what sort of apples you want to grow – cooking apples or dessert apples and what season they will be ripe. In my opinion there is little point in growing the apples that you can easily buy at your local shops – why not grow some early dessert apples that are best eaten off the tree and some dessert apples that will store or some cooking apples other than the ubiquitous ‘Bramley’s Seedling’? In any case there are many superb varieties of apple that your supermarket will not have heard of let alone be able to put their hands on!

Let’s have a look at dessert apples then. First of all the early apples – these are the apples that welcome the beginning of the “season of mists and mellow fruitfulness” and should only ever be eaten straight from the tree. I can promise you that the first apple of the season is a memory to cherish – sorry if I’m getting carried away but that’s how I feel!

Probably the best early apple that you can easily grow is ‘Discovery’. It is a bright red, large apple that fruits regularly and is fairly frost resistant. Although you do sometimes see the fruits in the shops they will have been off the tree far too long to keep that wonderful fresh taste. In my garden this year I ate my first ‘Discovery’ on the 17th August and it was absolutely delicious! But it is not an apple for storing.

Three mid-season apples I recommend are ‘Lord Lambourne’ which is very prolific. I have also found this apple to be very disease free and frost resistant and, in my opinion, no fruit collection is complete without it. ‘Scrumptious’ is a recently introduced bright red apple and has very good disease resistance. ‘Red Windsor’ is an aromatic flavoured apple which crops very well and is ideal for garden use.

Good late season apples which store past Christmas can be hard to find but I highly recommend ‘Fiesta’ which is an easy growing ‘Cox’s Orange Pippin’ seedling, ‘Herefordshire Russet’ which has a wonderful aromatic flavour and a fairly thin skin and the newly introduced and highly regarded ‘Christmas Pippin’ and it really is at its best at Christmas time!

Turning now to cooking apples, ‘Lord Derby’ is a large green apple which is best used between October and November. It is a very prolific grower and is fairly resistant to frost and disease. Interestingly the flesh of this apple turns pink when it is cooked! ‘Howgate Wonder’ is a wonderful late keeping cooking apple that can also grow huge which will make a great talking point. Oh yes and it’s ideal for baked apples!

If you would like to experiment you could grow the ‘Bardsey’ apple. This dual purpose apple was recently discovered growing as a single tree on Bardsey Island just off the Welsh coast. It is not a hugely prolific apple but – wow – what a history!

On the pear front I suggest that you grow something other than ‘Conference’ as it is so widely available. ‘Beurre Hardy’ is an easy to grow, prolific and very juicy pear which ripens from late September onwards. I also recommend ‘Concorde’ which is the result of a cross between ‘Conference’ and ‘Doyenne Du Comice’ and has the former’s easiness to grow coupled with the latter’s outstanding flavour. 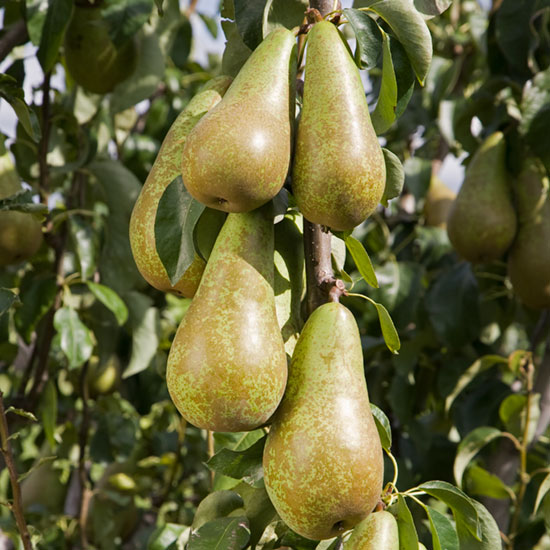