Although generally considered to be part of the plum family, damsons (and bullaces) are of the species Prunus insititata whereas plums are of the species Prunus domestica. The name ‘damson’ is derived from Damascus in Syria where it is considered that it originated and was introduced into England, in due course, by the Romans. The damson is also known as the damson plum or Damask plum in parts of Europe where it is used to make the spirit slivovitz. Bullaces, which are more acidic and lower in sugar than damsons, are considered to be native to Britain.

Damsons can have quite an acidic skin (making them unsuitable for eating straight from the tree) and also generally have an astringent and tart flavour which makes them absolutely perfect for producing outstanding chutneys, jams and jellies; indeed it is considered that the damson flavour is second to none for preserve flavour! However, some cultivars of damson are more suitable for eating from the tree as well as for making preserves and the well-known cultivar ‘Merryweather Damson’ is one of these. A liquid use of the damson is Damson gin which is made similarly to sloe gin but with less sugar added! 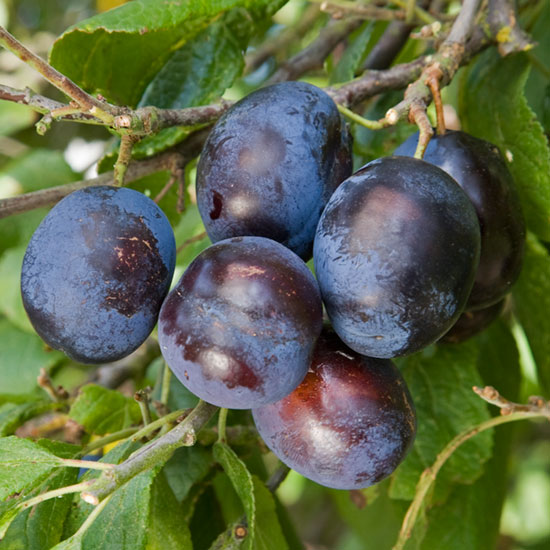 Damson ‘Merryweather’ is sweet enough to be used as a dessert plum when fully ripe.

Growing on the semi-dwarfing rootstock St. Julien A, damsons can be easily grown as bushes, fans, pyramids and cordons with the latter, perhaps, being the best choice where space is limited as in a row of 10ft, three different cultivars can be grown. Growing damsons as cordons means that you can grow them alongside your cordon apples and pears and you can make a very attractive feature of them. If a warm wall is available you could grow a fan but I would rather see this valuable location for peaches, nectarines or figs! Damsons are very tolerant of altitude, soil type, acidity and alkalinity. They will grow as far north as Scotland, and are particularly good for the wetter conditions of the western side of the country.

If there is no room in the allotment or garden damsons can be grown in pots. Using trees on the rootstock St. Julien A and planted in a reasonable size pot – say 15in (37cm) – and with a good soil compost such as John Innes 3 a very attractive and useful patio feature can be achieved. The pots will need to be kept well watered during the growing season but other than replacing the top third of compost every other year and applying Fruit Feed or a good handful of blood, fish and bone at the beginning of the growing season there should be growing problems.

Damsons – like other stone fruits – flower early in the year which means that if possible they should be grown in a sheltered position and away from frost pockets if at all possible or be prepared to cover the trees when frost is forecast. This is easily done with cordons using fleece, old sheets or net curtains! Fortunately over the years I have found damson blossom to be relatively tolerant of three or four degrees of frost which is more than most other top fruit can do! Try to site damsons in the warmest position in the garden as the warmth will bring out their best flavours when ripening.

Damson trees can be susceptible to the diseases Silver Leaf and Bacterial Canker but it is considered that damsons are less susceptible than plums. The disease generally enters the tree’s system and survives there because of poor management – pruning when the sap is not flowing, not noticing broken branches and allowing the tree to become weak due to the lack of essential nutrients. Pest wise there is little to cause severe damage apart from plum fruit moth caterpillars which are mainly active in the southern part of England. These caterpillars look like reddish maggots which can be found around the stone when the fruit is cut open. Fortunately there is a good organic control for these caterpillars and it is similar to that used for the capture of male codling moths in apples. The trap on this occasion uses a pheromone that catches the male plum fruit moth. In gardens these traps give more or less total control against these if used as one trap per five trees.

Damsons ripen in late summer/autumn and are best picked when they have developed their full colour. The fruits are ripe when the fruit easily parts from its spur. The fruit will only be of good quality for a few days so make sure that you use them at their best (and this applies to preserving as well as eating) – which is more or less as soon as you pick them! The fruits are generally very short keeping although Merryweather Damson may keep for a few days if kept in a cool and dark place.

The following cultivars are self-fertile but to ensure the best damson flavour it would be best to plant two or more cultivars to allow cross pollination.

Prune Damson (Shropshire Prune Damson) – The origins of this damson are unclear but it is probably of British origin and has been known in Britain since 1676. It is dark blue in colour with a blue bloom and has a greenish yellow flesh and develops a very good flavour when cooked. Season: mid to late September. RHS Award of Garden Merit.

Fairleigh – A chance seedling found in Fairleigh in Kent and introduced about 1880. It is considered to be a good damson with the true damson flavour. It is a heavy cropper and its blossoms can handle several degrees of frost. All round this makes a good damson for the garden. Season: mid-September. RHS Award of Garden Merit.

Merryweather – Probably one of the most widely grown of all damson varieties, being easy to grow, and producing good crops of classic damson-flavoured fruit and of plum size. However, despite having a damson flavour it has been argued that Merryweather is quite probably not a true damson but a hybrid damson/plum as it has many plum characteristics. Flavour wise Merryweather has the typical astringent damson flavour but unlike most damsons the fruit can be eaten fresh from the tree if allowed to fully ripen. Season: mid to late September. 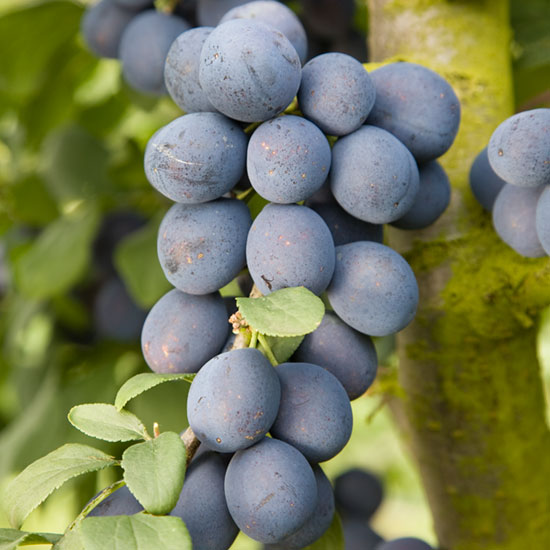 Damson ‘Farleigh’ is productive even in cold, wet climates.

2 thoughts on “Damsons for the Finest Jams”