There are many people who just love foraging around the countryside in the late summer or autumn for wild blackberries and if the berries are picked in time they are so very yummy! But getting the right time is a rather hit and miss affair and this right time changes with each season, so some years you may arrive to your favourite area to pick and find the berries are nowhere near ripe and some years you may find they are overripe or already picked! So the answer is to grow your own blackberries at home or on the allotment and not leave the chances of eating a fine blackberry and apple pie to fate! An additional benefit of growing your own is that you can choose to grow thornless varieties instead of having to fight with and through the vicious thorns of their wilder counterparts. Of course, you may deliberately choose to grow the odd vicious blackberry as a hedging plant to make your house or garden less friendly to would be burglars. You can now grow varieties which aren’t so vigorous as the old fashioned blackberry which seem to grow at around a meter per day at times and even primocane varieties which you can cut down each year and not have to worry about tying new growth in. You don’t even need to just grow the blackberries that we all know so well. Some new hybrids produce berries that are very large indeed and yet retain that wonderful blackberry flavour. There are other hybrid berries such as the tayberry and loganberry, to name but two, which are equally worth experimenting with.

The good thing about blackberries is that they will grow well in most locations apart from full shade, although some of the hybrid berries prefer a sunny location. Soil is less of a problem and I find that slightly poorer soils – unless they are waterlogged – help slow down the growth rate of the more vigorous varieties.

As ever always buy your blackberries or hybrid berries from a reputable supplier as these plants are very susceptible indeed to carrying viruses, so it is vitally important to start with disease free plants. Bare root plants can be planted from late autumn until the spring although pot grown plants can be planted at any time of year. Dig a planting hole – working over the bottom to eradicate any hard pan – about 45cm (18in) square and 7.5cm (3in) deep – there is no need to plant blackberries too deep, the roots are shallow and tend to stay fairly close to the surface. Cover the roots with soil and firm gently with your foot. Add a layer of well-rotted manure or compost in March as this will help keep the weeds down and keep the soil cool and moist. You should also keep the area weed free, but be careful not to use the hoe too much, as blackberries have shallow roots and you can really damage the roots, it is far better to weed blackberries by hand.

When growing blackberries or hybrid berries you need something to train them along and if you don’t have somewhere to train these fruits, they will quickly grow out of control and be harder to prune and less productive. You can most certainly grow them along fences and walls using horizontal wires or just fanned out for effect. Alternatively you can grow them on a post and wire system which is relatively easy to construct and is the best way to train blackberries or hybrid berries. You can do this by driving 2.5m (8ft) long and 7.5cm (3in) diameter posts into the ground to a depth of 75cm (30in) at 5m (15ft) intervals. Stretch 3.5mm plastic coated fencing wire between the posts at 30cm (1ft) vertical intervals. Alternatively use Gripple Wire which is a non-metallic UV stabilised nylon ‘wire’. The beauty of the Gripple Wire system is that the wires can be automatically tensioned with the Gripple tensioners rather than by use of standard straining bolts. You can now plant your blackberries or hybrid berries 2.5-3.5m (8-11ft) apart along the fence depending on the vigour of the plants.

The most important thing to recognise is that the majority of these plants have considerable vigour in them, some far more than others though, so they all need an annual pruning and a training system planned for them. Pruning is carried out after harvesting in summer or autumn. As the new canes start growing the following spring and summer they need to be tied into their supports. Fruit is produced on two-year-old canes (i.e. the previous season’s growth) so, to make things easy, keep this year’s fruiting canes separate from young new canes as the season progresses. Try tying the new canes in a vertical bunch in the centre (you can keep them tidy by tying them out along the top wire in bunches). Train the fruiting canes along the lower three wires, tying them in with twine. In autumn, the fruited canes can easily be pruned out from the base after harvesting, and you should then take the bundled-up current year’s canes and train them along the lower wires to make space for next year’s new canes to be bundled in the centre. Alternatively, tie fruiting canes in one direction and the current year’s canes in the other. Sometimes the fruiting canes are twisted around the wires in patterns to conserve space with very vigorous cultivars. Plants with strong, rigid canes that cannot easily be twisted around the wires can be trained as a fan, with the new growth bunched in the centre, as above.

As I noted earlier there are now some primocane varieties of blackberry around and these have the greatest of assets and that is their pruning technique. These blackberries are pruned just once a year in early spring when all growth is cut back to ground level.

In times of drought you will need to keep your plants watered and once a year in early Spring I suggest that you give all of your plants a good handful of Fruit Feed or blood, fish and bone.

There are now a huge number of varieties available and suitable for the garden or allotment and the following are my suggestions:

Black Butte is a relatively new variety which can produce berries up to 5cm (2in) The berries are rich and sweet and full of favour. Their main harvesting time is between early July and mid-August.

Buckingham Tayberry is a naturally thornless tayberry and identical in all other aspects. The berries are long and red and far more aromatic in taste than a loganberry. Highly recommended!

Chester is a good late season thornless blackberry which produces exceptional yields of high quality fruit making this blackberry one of the most widely grown blackberry varieties in the country. Unfortunately it is a very vigorous variety best suited to more spacious areas.

Karaka Black which originates from New Zealand, is one of the sweetest tasting blackberries available as well as having an eye catching, elongated shape. These dark black fruits are very firm, have a good blackberry flavour and have an outstanding shelf life. Karaka Black is the earliest high quality variety available. Picking commences in early July and can extend until early September.

Loganberry LY654 is a natural thornless mutation of the well-known loganberry. It is probably the best known raspberry x blackberry hybrid which still has its place in your soft fruit growing areas. The berries are large, succulent, juicy and rich and best eaten when dark red in colour. Picking commences in mid-July. 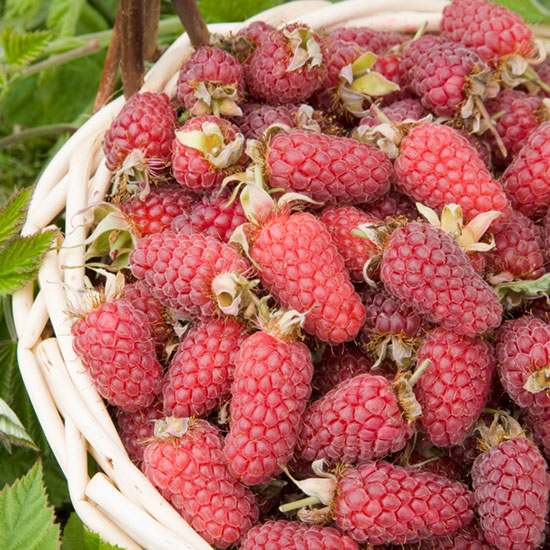 Loch Maree produces an unusual, double pink blossom making it both decorative and productive in the garden. The fruit size is similar to Loch Ness but it crops earlier and the berries have a superior flavour, although the plant itself is more vigorous than Loch Ness. The thornless canes are semi-erect and fairly vigorous.

Loch Ness is probably the most widely commercially planted blackberry and has the added benefit of being thornless as well as being a fairly compact grower. This variety produces very high yields of top quality fruit which is large, very firm and glossy black. It’s season starts in early August and will often last until early October. 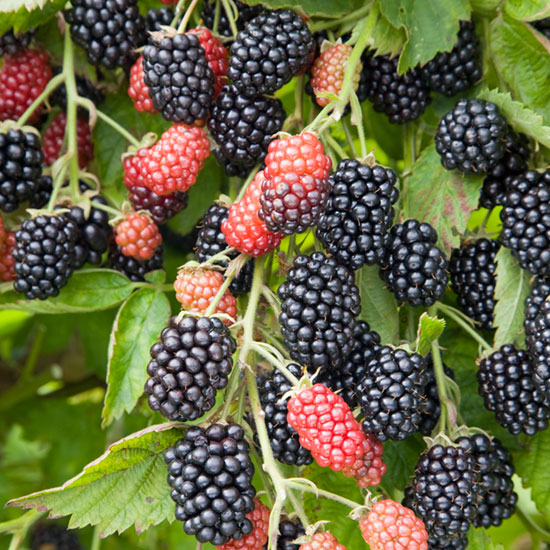 Obsidian produces large berries which are even in shape and stay firm even after being kept in the fridge. The flavour of the berries is outstanding and the crop is always reliable and heavy. It will start fruiting in early August and picking can last for many weeks.

Reuben is the world’s first primocane blackberry (i.e. cropping on first year growth) and it produces very large, sweet berries. Because of its primocane habit there is the potential to get two crops every year – a summer crop on the old canes and a later crop on the current season’s growth as with primocane raspberries. This is not in the slightest vigorous and as it has a very upright habit Reuben can even be grown in a pot or container.