Plums are a wonderful fruit to eat and cook with and fortunately an ideal fruit for growing at home, so please ignore the pundits who may suggest the contrary! When I refer to plums I use this term to include gages as they are essentially the same fruit. Gages are considered to be so named after Sir Thomas Gage who was a great fan of the juiciest plums and would go out of his way to select and hunt out the finest.

We have two main rootstocks for plum growing. ‘St Julien A’ is the most widely used rootstock and will produce a tree substantially smaller than a tree grown on its own roots. The more dwarfing rootstock ‘Pixy’ will produce an even smaller tree but requires better soil conditions and more frequent watering. Plums can easily be grown as bushes, fans, pyramids and cordons – I personally prefer the latter as they can be grown in a very small space and in a row of 15ft at least five different varieties can be planted. Growing plums as cordons means that you can plant them alongside your cordon apples and pears and you can make a very attractive feature of them. If a warm wall is available you could grow a fan but I would rather see this valuable location for peaches, nectarines or figs!

If you have absolutely no room for planting plum trees in the open ground, you could consider growing them as cordons in pots and containers.  As long as you plant in a reasonable size pot – say 15in (38cm) – using a good soil compost such as John Innes No. 3 and incorporating Rootgrow mycorrhizal fungi, you will have a very attractive and useful patio feature. Obviously you will need to keep the trees well watered during the growing season but other than replacing the top third of compost every other year and applying Fruit Feed or a good handful of blood, fish and bone at the beginning of the growing season, you should have no growing problems at all.

When growing plums you do need to be aware of a different rule regarding their maintenance – and this applies to all stone fruits – and this is to make sure that you do not prune them unless the sap is rising. This generally means no pruning between mid-September and mid February – the prime reason for this being that plums are very susceptible to the virus Silverleaf and once this virus takes hold the tree is pretty well doomed. 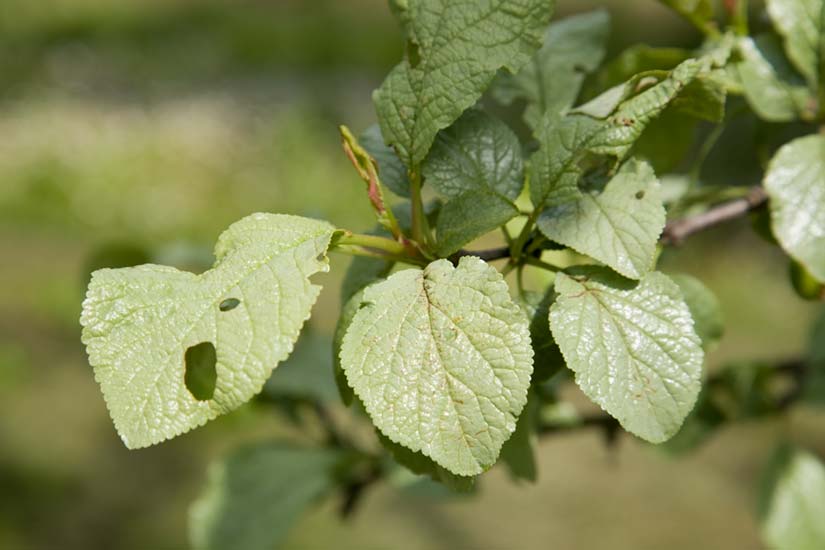 You also need to recognise that plums flower early in the season which means that if possible they should be grown in a sheltered position and away from frost pockets if at all possible or be prepared to cover the trees when frost is forecast. This is easily done with cordons using fleece, old sheets or net curtains! Strangely I have found plum blossom to be relatively tolerant of three or four degrees of frost which is more than most other top fruit can cope with! Try and site your plums in the warmest position in the garden as the warmth will bring out their best flavours when ripening.

One particular growing feature about plums is that in a good year the crop on a plum tree can be huge with branches often weighed heavily down with a large quantity of fruit. If this occurs on your trees you must thin this fruit rigorously or it is likely that you will end up with a crop of small fruits, broken branches and a poor crop in the following season. Even with a good crop that has been thinned there is likely to be a heavy weight on some branches and as plum wood can be a little brittle, these branches should be given some support until the crop is harvested. This can be done by using forked sticks to support the branches or by using ties holding the branches up.

Unfortunately plum trees can be  susceptible to the diseases Silverleaf and Bacterial Canker but I rarely find that trees grown well suffer from either of them. In most cases when the disease enters the tree’s system and survives there it is because of poor management – pruning when the sap is not flowing, not noticing broken branches and allowing the tree to become weak due to the lack of essential nutrients. Pest wise, apart from bird damage that I have already mentioned, there is little to cause severe damage apart from the plum fruit moth caterpillar which is mainly active in the southern part of England. These caterpillars look like reddish maggots which can be found around the stone when the fruit is cut open. Fortunately there is a good organic control for these caterpillars and it is similar to that used for the capture of male codling moths. The trap on this occasion uses a pheromone that catches the male plum fruit moth. I find that these traps give total control against these caterpillars and I use one trap per five trees.

Plums should be picked when they have developed their full colour. They are are ripe when they part easily from its spur; but be careful when picking as plums bruise easily. The fruit will only be of good quality for a few days so make sure that you enjoy them at their best – which is more or less as soon as you pick them! It will probably be necessary to pick over the trees two or three times because not all of the fruit ripens at the same time but this will give you a greater chance to enjoy the pleasures of eating these delicious fruits.

Providing you carefully select the cultivars you grow, you will be able to pick plums over a three to four month period and it is well worth growing a range if  possible as the majority of plums will not store fresh. One or two late plums such as ‘Marjorie’s Seedling’ and ‘Coe’s Golden Drop’ may store for a few weeks in a cool and dark place but nevertheless they are still best eaten as soon as possible after picking. I am pleased to say that all varieties I recommend are self-fertile unless otherwise noted which means that you can get away with growing only one if you have a really limited space.

There are many cultivars of plum to choose from but I will recommend my favourite ten as a starter!

Cambridge Gage is well worth growing for those who like or remember the original greengage. This gage is almost indistinguishable from Old (English) Green Gage and it is excellent for dessert, cooking and preserving. It is round, small and greenish yellow with a wonderful juicy flavour. It is ready to eat from late August/early September. Unfortunately it will need a pollinator as it is not fully self-fertile but Oullin’s Golden Gage or Victoria will do the job well. 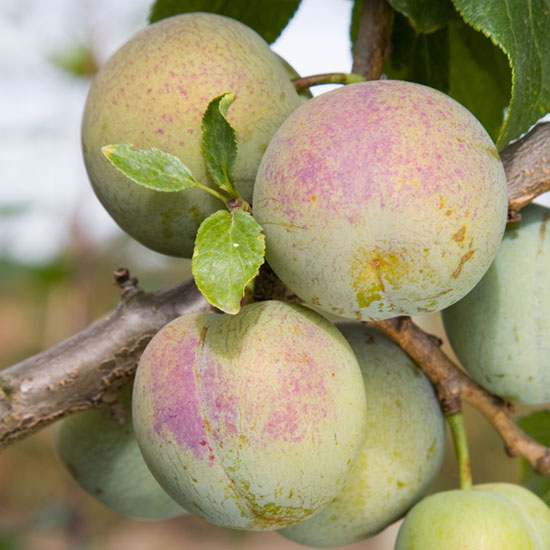 Coe’s Golden Drop is a late plum. It is an excellent dessert plum which has at times been described the finest tasting of all plums. The fruits are oval, moderate to large in size, straw yellow with reddish brown spots where the fruits are exposed to the sun and they are very juicy, very sweet and have a flavour often described as apricot like. They are best grown in the protection of a warm wall but will produce a useful crop elsewhere in warmer summers. However, this variety does need a pollinator and Denniston’s Superb is ideal for this.

Czar is a mid-season blue/purple dual purpose plum with a very good eating flavour. It is a very reliable plum which crops very well in most seasons. It is self-fertile.

Denniston’s Superb (also known as Imperial Gage) is a first rate plum of the greengage type. Although it is not a true greengage it has a good gage like flavour and is good for colder gardens as it is fairly hardy. The fruits are greenish yellow with dark green streaks and an occasional red flush and have a fairly juicy, good flavour. It is a regular and prolific cropper and is ready to eat from mid to late August.

Jubilee (also known as Jubileum) is a relatively new mid-season self-fertile dessert. This plum looks very much like a large Victoria although it is completely unrelated. It is well worth growing and often very prolific in cropping.

Marjorie’s Seedling is a late plum excellent for cooking and a fairly good dessert plum when it is really ripe at the end of September. It is very resistant to diseases and as it flowers late – one of the last to flower – it is suitable for colder gardens. The fruits are large, round to oval and purplish with a blue bloom. When fully ripe they are juicy and fairly sweet. It can be very decorative in the garden as the fruits often stay on the tree – birds permitting – until the end of October when the leaves have usually fallen.

Opal is a quality plum and is medium reddish purple in colour. It is ready from the end of July and is considered to be one of the finest early plums. It is almost gage-like in texture and has an outstanding taste. 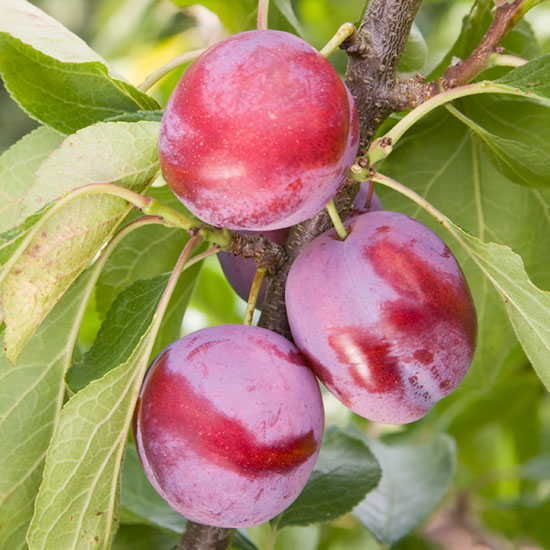 Opal is one of the finest flavoured dessert plums.

Oullin’s Golden Gage is a fine decorative variety as the fruits are large, round and yellow with green dots. It has a fairly sweet flavour and it is ready for picking from mid-August. Although this plum is not of the highest quality it wins on its decorative value.

Victoria mustn’t be forgotten, of course, and is rightly a popular plum because it is very hardy and frost resistant, meaning that it can be grown successfully in the colder parts of the country. Although it is not of the highest dessert quality, it is excellent for making jams. The fruits are large and pale red and are ready to eat from late August/early September. It can be a very heavy cropper at times and thinning is particularly important as the wood is somewhat brittle.