As far as I am concerned raspberries are the best of summer and early autumn fruits yet until fairly recently neglected by commercial growers who were more intent on growing strawberries. Fortunately there has been a resurgence in raspberry growing commercially in the UK and this has benefited the amateur grower both in terms of new cultivation methods and varieties.

The most important thing to know is that raspberries will grow almost anywhere in the UK providing they are grown on fairly well drained soil and are in a sunny or semi shaded location. Having identified where you want to grow your raspberries give the ground a good working over before planting removing all weeds, particularly perennial weeds, and add some organic matter if available and a good handful of Fruit Feed or blood fish and bone and dig well in. Apply Rootgrow (mycorrhizal fungi) directly to the roots before planting – this will help the plants to establish quickly. Raspberries do not like their roots standing in very wet soil over the winter months nor do they like dry conditions. Obviously the former is hard to correct – although you can try planting on a raised bed – but if you have a light soil mix plenty of bulky matter in before planting and keep well watered during dry weather. You will need some form of supporting structure to tie the growing raspberry canes to and this essentially is achieved by using post and wires. The Gripple wire tensioning kit sold by Pomona Fruits is absolutely ideal for this purpose as the ‘wires’ are, in fact, made of UV stabilized nylon wire and will neither rot or rust and is easily pulled tight by hand using the tensioners supplied with the kit. 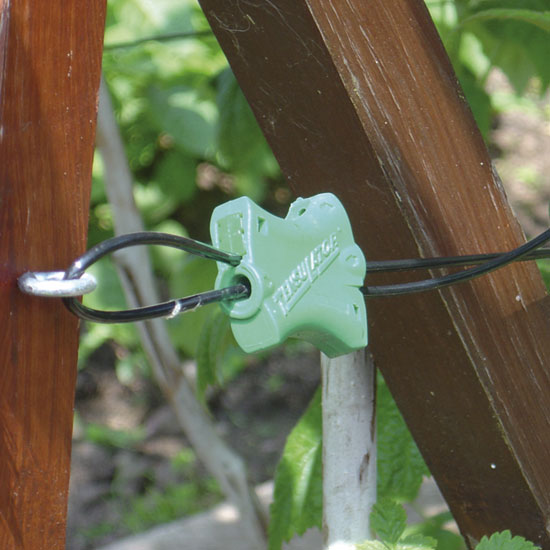 The Gripple system is ideal for supporting raspberry canes.

Only buy your raspberry plants from a reputable source such as Pomona Fruits; indeed only buy plants that are certified as being disease free. This is absolutely critical because soft fruit – particularly cane fruit and strawberries – are very susceptible to diseases and you want to make sure that the plants you buy are not infected and therefore you will not be taking new diseases to your garden or allotment. Traditionally summer and autumn fruiting raspberries are sold as bare rooted plants between November and late March. In the case of summer fruiting varieties the new growth should be fixed onto your supporting structure ready for fruiting the following year. In the case of autumn fruiting varieties, support may not be necessary and the new growth will produce fruit later in the autumn. There is absolutely nothing wrong with establishing a plantation with this type of planting material and to many the pleasure of growing this way will continue. But there is a new alternative which I will describe later on.

Aim to plant out your plants as soon as you get them if you can having soaked the roots in water first for half an hour or so. If you cannot plant for a day or so keep them with roots covered – a black bin liner is ideal for this – in a dark shed or garage but if you cannot plant for a week or two it is best to ‘heel’ the plants in a spare piece of ground. I suggest that you aim to have a double row with the plants spaced at around 40cm (16in) apart and 1.5m (5ft) between the rows. You will find that a double row of six plants in each row will give you a good crop for the season but if you are a real raspberry lover – like my wife who will eat them until the cows come home – grow several varieties. As with other fruits do not replant raspberries on the site of a previous crop of raspberries as organisms remaining in the ground will likely prevent good growth. When you have planted them cut the canes back to around 7.5cm (3in) from the ground level. In future years you will need to cut down to the ground canes that have fruited allowing new canes to grow up and be tied to the supporting structure.

Autumn fruiting raspberries have become very popular in recent years and are simple to grow and can produce a summer crop as well – but more of this in a minute! The beauty about growing these autumn fruiting raspberries is that they produce fruit on the current year’s growth which means that there is no tying in of new canes and cutting out old canes as with the traditional summer fruiting raspberries and because they have a short growing season they do not grow particularly high, so they do not need an elaborate support structure. Indeed it is quite possible to grow these raspberries without any supports at all although I do grow mine with just one wire supporting them to stop them falling over. During the winter months – I do mine in January – all of the canes are cut down to the ground ready for the new growing season and it’s as easy as that. The really good news is that much research and development has been undertaken with these autumn fruiting raspberries and as a result a number of new varieties have recently been released.

Now let’s go back to what I said earlier about autumn fruiting raspberries producing a summer crop. This is the clever bit! If you do not cut down the autumn fruiting canes during the winter and allow them to continue growing they will produce a further crop on the same canes the following summer – just as productively. These canes need to be cut down when the summer crop is finished and the new canes that emerged earlier in the season will carry the autumn crop. Incidentally those canes that are grown for a summer crop will still not need anything other than a single wire to support them as they do not grow much more in height during the following year. One thing you must note though is that your autumn crop will be affected by this ‘double cropping’ and by continuously double cropping the canes, you will weaken the plants and ultimately shorten the life of your raspberry bed. If you want to adopt the double cropping method of growing whilst avoiding the downside effects, I would suggest you plant two rows of autumn fruiting raspberries – to put it simply, row A and row B. The objective is to alternate the cropping of the rows to allow the summer fruiting row to have a rest in the autumn. The method is as follows:

Year 1 – After initial planting, both rows will produce an autumn crop. After cropping, Row A should be allowed to grow on whilst Row B should be cut down to ground level in January.

So on to the new method of cultivation. An exciting raspberry development is the advent of cell grown raspberry plants. These have come about as a result of commercial growers wanting to overcome winter losses caused by trying to establish bare rooted plants. Cell grown plants are achieved by taking cuttings in March and April from the new growing tips of established plants and these cuttings are grown on in cells ready for planting out from mid-May to late June. As soon as these cell plants are received they are planted out in the warm soils of early summer (rather than the cold, wet soils of winter) and they will quickly get away and be ready to produce a crop the following year. Winter losses will be minimal as the plants will have their roots well into the ground. From the first fruiting year onwards these plants are treated the same as other raspberry plants. Pomona Fruits sell a range of popular varieties as cell grown plants. 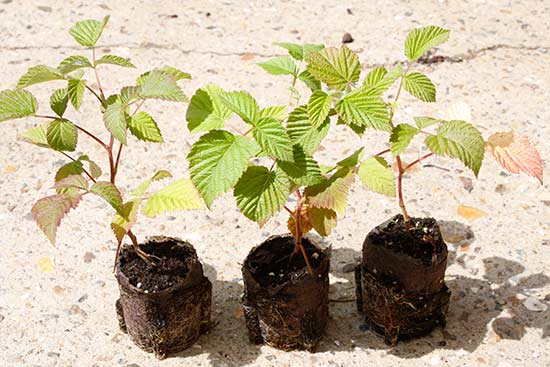 The use of quality cell grown raspberry plants to establish commercial fruiting plantations is now a widely accepted technique and is becoming increasingly popular with home gardeners.

Your raspberry plants will not last for ever and I would suggest that after ten years the plants will be starting to decline in vigour and you will need to replace them. However, you can encourage them to work well for you by giving them an annual feed of Fruit Feed, blood, fish and bone or After Plant Organic Plant Food with Rootgrow and by removing any canes during the growing season which are obviously too small and thin to produce fruit or which are obviously damaged or diseased.

It is essential that all raspberry plants are well watered in their first year as the roots must not dry out. Many raspberries do not survive into a second season and this is almost certainly due to drought. As with all soft fruit it is important to water all plants well during fruiting as this will encourage a good fruit size.

Cascade Delight – this is a new variety with lots of promise. It produces heavy crops of very large berries between early July and early August which have a superb sweet flavour. This is an ideal variety for wetter soils as trials have shown it to have good resistance to root rot. 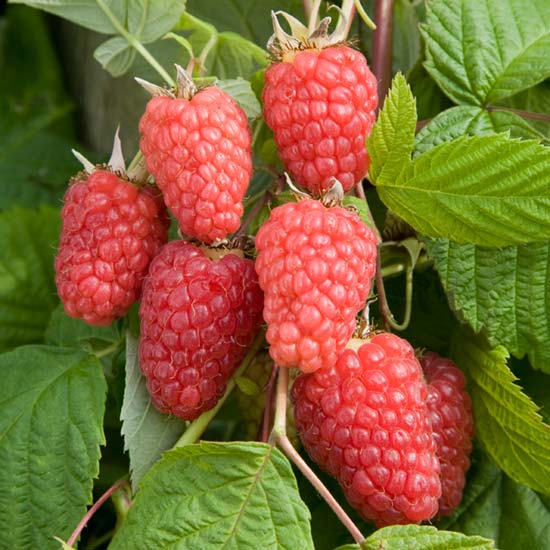 Glen Ample – a widely grown mid-season raspberry which produces heavy yields of large, bright red berries. Indeed this variety was given its name for a very good reason! The canes are spine free and the plants have some resistance to root rot. The season is July. This variety has been awarded an Award of Garden Merit (AGM) by the Royal Horticultural Society.

Malling Admiral – this is a good garden raspberry variety which has long proved itself. The berries can be quite large and are deep red and will be in season in July. This variety is also resistant to root rot. (AGM)

Malling Minerva – a fairly recently introduced variety which is considered the best early fruiting raspberry available. The berries are quite large and pick easily and with canes that are spine free this raspberry is a pleasure to grow. This raspberry, which is in season between late June to late July has good disease resistance.

Tulameen – this is a fairly new late summer fruiting raspberry and widely grown in gardens and allotments. The berries are very large and bright red and have an excellent aromatic flavour. As the shoots tend to emerge in late spring they are less likely to be damaged by frost than other varieties. The season is early July to early August.

Autumn Bliss – this was the first of the heavy cropping autumn raspberries and is probably the widest grown. When grown for autumn fruiting they will start cropping from the beginning of August and last to the first frosts and when grown as summer fruiting they may be as early as the end of June depending on the weather and location. (AGM)

Autumn Treasure – an outstanding new introduction particularly suited to organic growers as it is resistant to root rot and powdery mildew. The berries are very large and bright red and have a deliciously sweet flavour. The canes are spine free and require little support. It’s season is from early August to late October.

Joan J – a superb spine free autumn fruiting raspberry. The berries are very large and ideal for freezing as they maintain their shape. (AGM) 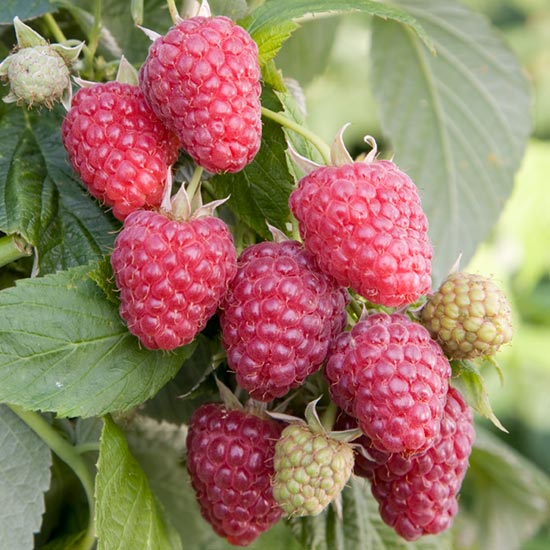 Joan J – The berries are 30% larger than Autumn Bliss and freeze exceptionally well.

Polka – this is an outstanding new autumn fruiting raspberry. The fruits are exceptionally large and have a superb aromatic flavour. Very heavy cropping, producing up to double the yield of Autumn Bliss. The spine – free canes are short and sturdy and may not require supporting at all in sheltered gardens. Polka will commence cropping at least two weeks earlier than Autumn Bliss. (AGM)

There are several other varieties of raspberry available and I suggest that you browse through the Pomona Fruits website before you finally order!