Asparagus is one of those vegetables which just ooze sheer quality and in their season – which is late spring until mid-June – simply can’t be bettered for eating quality. A plateful of cooked spears spread with a little butter is one of my highlights of the year!

Unfortunately a view seems to prevail that asparagus is hard to grow, plants takes up too much space and they take several years before coming into useful cropping and this naturally puts off many would be growers. All of this was true years ago but modern varieties are well worth trying out. This is largely because there has been a considerable interest in growing asparagus at home and as a result the Royal Horticultural Society (RHS) through its Vegetable Trials recently identified a number of varieties which were awarded the prestigious Award of Garden Merit (AGM). If you would like to read a report of this asparagus trial it is in The Garden magazine (April 2013) which is produced by the RHS.

Always ensure that you buy good quality one year old asparagus crowns – varieties are recommended later – from a reliable source such as Pomona Fruits and do not buy cheap plants from unknown sources or use plants from friends or acquaintances. For the best of results it is essential that you have disease free, strong growing crowns. One year old crowns are perfect for planting – avoid older crowns as they are less likely to settle down well. Traditionally asparagus crowns are planted in April to take advantage of a warming soil and trials have proven this to be a sensible way of cultivation. 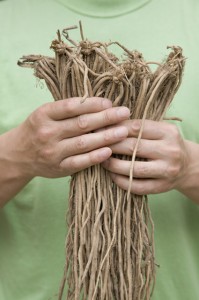 Asparagus plants will be in the ground for a long time so it is important to identify a part of your garden, vegetable plot or allotment where they can be grown and not disturbed. Incidentally my grandfather’s generation often grew asparagus plants in flower borders as the “ferns” – i.e. the leafy part of the plant – can be very decorative but that was in the days when large gardens were the norm.

Asparagus will not tolerate disturbance and may well die if transplanted to a new location. You are going to need at least 12-18 plants if you want a reasonable amount of spears during the relatively short asparagus season which means that you are looking at a space of 3 metres long by 2 metres wide (to accommodate 3 rows of 6 plants) but this is no different to the size of a good runner bean trench. Asparagus is best grown in a sunny location as the sun in May and June should be warm and the emerging spears thrive in warmth. It is best to avoid locations where frost lingers as the emerging spears can be damaged by an interaction of the sun on frost.

As with any long term planting you need to prepare your site well. Remove all weeds at the beginning and then take out a trench one spade in depth. Thoroughly fork over the bottom of the trench and include some well-rotted compost. Add back some soil and then plant your crowns 450mm apart approximately 150mm deep ensuring that the roots are well spread out. Unless the weather is very wet give the planting area a good soaking on completion of planting. Ensure that the whole area is kept weed free and watered in times of drought. Do not cut any spears if they emerge in this planting season. In the second year after planting you may cut a few spears providing the plants are growing well. My advice, however, is not to cut too many spears for the first couple of years and this will enable the plants to become really well established. However, with a good number of plants you should still have a reasonable harvest.

As I noted at the beginning a number of new asparagus varieties have been awarded AGM’s and I suggest that you look toward these for planting as well as other outstanding varieties. Five good varieties which I recommend are:

Gijnlim – This is heavy cropping and reliable and will produce a large number of spears by its third year after planting. The spears are green but will grow white if blanched by soil or other covering. RHS Award of Garden Merit.

Guelph Millennium – Bred in Canada and as a result has a good tolerance of colder weather. It was one of the heaviest cropping varieties in the asparagus trials. RHS Award of Garden Merit.

Mondeo – Bred in Germany, this is a very good cropper. It grows well on all soils and produces green spears earlier than many other varieties.

Pacific 2000 – Another heavy cropping variety which produces very tender spears that can be eaten without the need for cooking.

Stewarts Purple – This was bred in New Zealand and has purple spears. The spears are much sweeter than most and having less fibre means that they are almost stringless. RHS Award of Garden Merit.

If you have the space I thoroughly recommend that you try growing asparagus. In my opinion it is well worth the room that you devote to it and those first couple of years without taking a crop will be very heavily outweighed by many years of cutting wonderful crops of delicious and succulent spears!

2 thoughts on “Planting an Asparagus Bed”