Finding fallen, immature fruits underneath your fruit trees can be very disappointing and quite often wrong conclusions are drawn. Sometimes fruit drop is beneficial, sometimes it is annoying but not a problem and sometimes it can be a sign of more worrying factors such as pest infestation.

The most common of these is what is commonly known as the June Drop which particularly affects apples but it can also affect pears. What happens in this instance is that numerous young fruits are shed by the tree and start falling to the ground around eight weeks after flowering, which is around the beginning of June for pears and the end of June for apples and both continuing for a couple of weeks. This is simply caused by the tree naturally deciding how many fruits it can bear into the cropping season without adversely affecting the growth of the tree. In effect this is natural thinning. Sometimes the drop can be considerable when a tree has produced a large number of young fruits and sometimes minimal where the tree has only produced a small number of young fruits. Because of this natural drop we don’t look to thin apples and pears until well after this drop has occurred. Hand thinning of apples and pears will increase fruit size in those remaining if deemed necessary.

In the case of plums, gages, damsons, peaches, nectarines and apricots there will also be a drop although this will occur usually in May. However, these fruits are often not quite so good at their natural thinning out and it may well be that a fair amount of hand thinning is required to achieve a balance between a good crop, fruit size and too much weight for a branch to survive without breaking.

The one stone fruit that I haven’t mentioned so far isn’t quite so well behaved! The cherry, if left to its own devices, can lose up to 90% of its initially set fruits and this is not at all good particularly for the commercial cherry grower. This is known as cherry run-off and needs specific procedures in order to maximise a crop. This huge crop loss can be addressed in a number of ways although in a ‘bad’ year there could still be a large loss. There are three particular measures which can be adopted. The first is to prune bush trees to give a well open centre which will allow more light in to maximise light to all leaves. The second is to thin fruits at a very early stage – just as the petals are about to fall off. The rule here is to allow no more than ten fruitlets per spur. The final measure is to ensure that when there is a dry spring such as this year, cherry trees on dwarfing rootstocks are kept well-watered although not saturated. Experience over a few years will help you get the right balance of all these factors.

It should be noted that young fruit trees are usually prone to substantial fruit drop until roots are established and can take up the required growth nutrients.

All fruits need to be pollinated to set fruit properly. This may take the form of cross pollination between trees as required, for example, by apples and pears or by self-pollination as, for example, many cherries, plums and damsons. Pollen is only viable when weather conditions are right and this mainly means when it is warm enough. In any case the weather needs to be warm enough for pollinating insects to be flying and even the most hardy bumble bee won’t fly at temperatures much lower than 7.5ºC (45ºF). Therefore it is highly possible that a fruit tree flowers at a time when the pollen is of little or no use and come what may full pollination will not take place. No pollination, of course, means no fruit set and poor pollination (caused by only partially viable pollen being available) leads to poor or incomplete pollination. Some apples, pears and stone fruits may still set fruits after poor or even no pollination but these fruits will invariably fall off the tree at a very early stage as they will be unable to grow any more and this will be the fruit drop that you may see in April and May.

Unfortunately little can be done to control weather conditions. All we can ever hope for in a fruiting season is for the temperatures at flowering time to be good during the day and not dropping much below 1ºC (33ºF) at night time. This rarely happens and even this year’s spring which started off so well got too cold in May for a good apple set.

Having noted that pollination can be badly affected by cold weather so the growing fruits can be as well. If baby fruits are damaged by very cold weather they will fall off the tree at a very early stage, often blackened. It is possible to cover fruit trees with fleece to keep the cold at bay but this is simply not possible or sustainable if you are growing more than a handful.

Having dealt with three very natural and hard to prevent factors, we now move on to pests which, with the exception of pear midge, can be prevented from doing too much damage, So let’s look at the exception first and this is the little beast known as pear midge. In many ways it is similar to the apple codling moth where the female will lay an egg or two in the flower leading to the grubs spending their life trying to find their way out of the apple. The pear midge female lays several eggs which rather than try and find their way out, feed in the middle of the baby fruit causing it to be rejected by the tree and then falling to the ground. What the grubs want to do then is find their way out of the rotting fruit and into the ground to start another cycle. Unfortunately there is no cure for pear midge, organic or chemical so the only way to fight back is to collect all of these small fallen pear fruits and either burn them or take them in a sealed bag to your local tip. It is very easy to believe that the fallen pears are actually frost damaged, as they look similar, but I would urge you to collect them up and dispose of them. If you want real proof, open one up and see what’s crawling around inside! 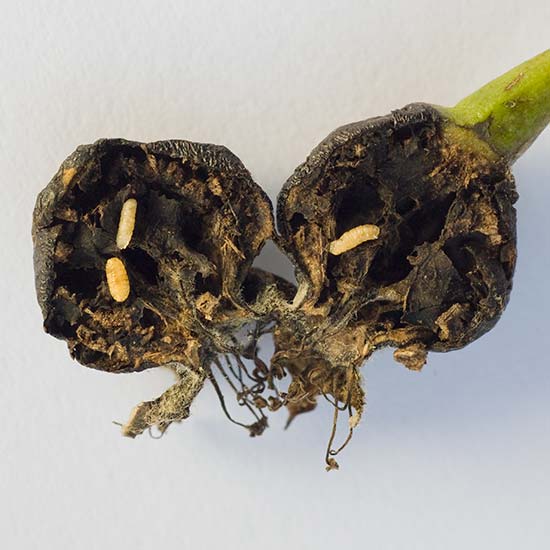 Having mentioned codling moth, I must take this one to its conclusion. As I noted the codling moth grubs eat their way through apples before they eventually emerge leaving the small holes that you often see. In their early days apples containing codling moth grubs are not rejected by the tree but in early autumn they will be the first of the ‘right’ size fruits to fall as the tree decides they are of no further value to it. 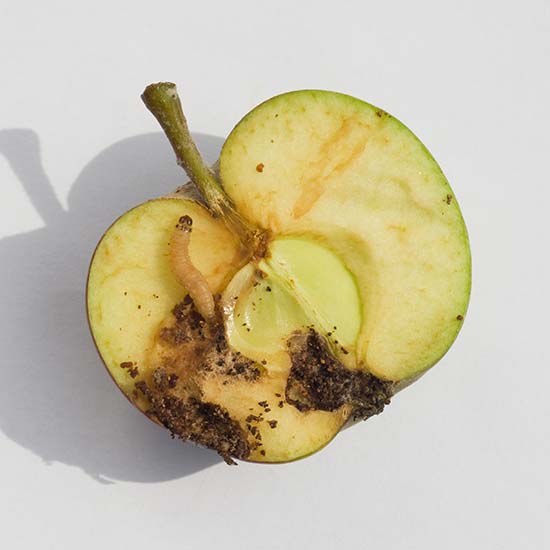 Fortunately codling moth is fairly easily controllable by the use of pheromone traps which you hang in your fruit trees. Providing that you put these out from about the middle of April you will get a very good organic control indeed. Just feel sorry for the poor male moth who thinks that he is on to a good thing but finds himself stuck in a sticky trap rather than tending to the needs of a beautiful female!

2 thoughts on “The Causes of Fruit Drop”