Breeders for hundreds of years have been attempting to develop new varieties of fruits to enhance colours, taste, easiness to grow and disease resistance amongst other things and this has given us a large range of apples, pears, plums, peaches etc. to choose from. Traditionally fruits are bred by deliberately crossing (collecting pollen from one variety and using it to fertilise another variety) two known varieties of one type of fruit. In order to push breeding forward major progress has been made in two areas, still using traditional methods (as opposed to genetic modification).

One area is to achieve crosses within one type of fruit but using new material (often discovered growing wild) to achieve dwarfing, resistance to disease and unusual shapes and this has been particularly used in the development of peaches and nectarines. The second area is to undertake interspecies crosses to develop certain requirements and this has resulted in some extraordinary new types of hybrids such as Pluots (plum/apricot), Apriums (apricot/plum) and Cherums (cherry/plum). Additionally new rootstocks have been developed for peaches, nectarines and some of the interspecies crosses that I will be mentioning and this has enabled a move away from St. Julien A and Pixy. Look out for the new rootstocks Krymsk 86 and Montclair which are semi dwarfing to reduce tree size but will help improve yield and fruit size.

The leading world fruit breeder Zaiger Genetics Inc. of California have been involved with a huge amount of breeding both across single fruit types and with interspecies crossing for a considerable time. The use of the word genetics in Zaiger’s name is somewhat misleading as they are not using genetic modification but traditional breeding methods as mentioned above. Each year the Zaigers plant tens of thousands of new seedlings, each tree the result of a controlled cross of two parent trees from their vast inventory of breeding stock. Essentially all of the varieties that I will talk about below have been developed by Zaiger in their various fruit breeding programmes.

So considering each area of breeding let’s start with the first I noted – breeding within a single fruit type. The prime beneficiaries of this are peaches and nectarines. Development with these fruits had been needed as little breeding and research had taken place for many years. Traditional “old” varieties can be challenging to grow in some parts of the country and without careful management can end up as large trees, hard to fruit and subject to peach leaf curl. Recent breeding has produced various types that are suitable for the garden. The first of these are the dwarf peaches and nectarines which will grow little more than 1.2m in height. Particularly recommended are ‘Diamond’ which produces large white fleshed peaches in August, ‘Crimson Bonfire’ which has stunning purple leaves and pink flowers and produces heavy crops of yellow fleshed peaches in early September and ‘Snow Baby’ which is a wonderful dwarf nectarine producing delicious white fleshed fruits in late August. Ideally each of these can be grown in pots or containers on the patio and then easily kept covered in winter under glass or with a polythene sheet to help prevent damaging peach leaf curl. Nectarine ‘Snow Baby’ is ideal for small gardens or growing in a pot on a patio.

Zaiger’s breeding strategy has been to develop peaches and nectarines with a high sugar-to-acid balance. The new yellow fleshed nectarine variety ‘Honey Kist’ is well worth considering as it has some resistance to peach leaf curl, is heavy cropping and the spherical fruits when ripe can be dark red and most attractive. Another strand of breeding in peaches and nectarines are the peento (flat, doughnut shaped) peaches and nectarines which first originated in China hundreds of years ago and are now becoming very popular to grow due to their intense flavour, juiciness and heavy cropping. Recommended new varieties are ‘Sauzee Bel’ which is a white fleshed flat peach and ‘Sauzee King’, a white fleshed flat nectarine. Both of these will crop in August from an early age.

We can now move on to interspecies crossing which has largely taken place in the U.S.A by Zaiger. Research has shown that apricot/plum and plum/apricot hybrids have been around for hundreds of years as a result of these two prunus species naturally crossing and more than 100 years ago, horticulturalist Luther Burbank bred the plumcot with a 50-50 plum and apricot split. However, Zaiger has crossed the plumcot with a plum to create the Pluot (60% plum and 40% apricot). While the plumcot is a simple plum and apricot cross, Pluots and Apriums (75% apricot and 25% plum) are the result of intricate crossbreeding over several generations. 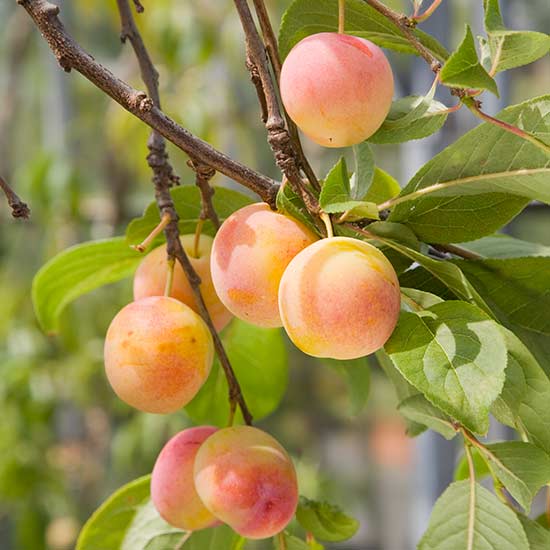 More than 100 years ago, horticulturalist Luther Burbank bred the plumcot.

So what is the advantage of these interspecies crosses? Although many regard them as novelties they are not. The intention behind the Pluot was to develop a large plum with a very juicy plum flavour which is an attribute that many large plums do not have. Apriums were developed to enable easier growing of apricot type fruit – in some regions growing apricots can be hard work – but retaining the flavour of the apricot. The reason for developing Cherums (cherry/plum) was not so much looking to develop a new fruit but to develop a cherry that is easier to grow, less prone to cracking in wet conditions and has more sweetness. Size is not a major factor as the breeders are intending that the resulting fruits need to remain cherry sized. Trials have so far shown that Pluots and Apriums will grow well in the U.K. and are now available for planting in the garden whilst Cherums (cherry/plum), Pluerries (plum/cherry), Peacotums (peach/apricot/plum) and NectaPlums (nectarine/plum) may be available in the future if they are found suitable for growing in our climate.

I thoroughly recommend you trying Apriums and Pluots as these do seem to work in UK conditions and Apriums in particular may just work out a lot easier to grow and crop than apricots. In the case of Pluots – which as I noted earlier taste very much of sweet plums – I suggest that you grow ‘Flavor Supreme’ which was one of the earliest plum/apricot crosses and considered one of the best Pluots available for U.K growing conditions, producing large peach sized fruits which have the juiciness of a good plum. For Apriums – which have a really good apricot taste – I recommend ‘Cot ‘n’ Candy’ which is a yellow skinned plum like fruit but with the taste of apricot and considered easier to grow than most apricots. The crossing of plums and apricots has resulted in dozens of varieties of pluots including ‘Flavour Supreme’.

As I noted at the beginning of this blog we are in new fruit growing territory and I will be delighted to hear from gardeners on successes or failures with these new fruits.

2 thoughts on “The Future of Fruit”