Despite opinions to the contrary apricots can be grown in the open garden or allotment although in the colder parts of the country they are best grown under glass or a polytunnel. Before I go any further I should warn you that apricots are similar to other stone fruits in that their quality diminishes quite rapidly from the moment that they are picked and as a result they are best eaten direct from the tree although they will store for a few days – however, I can promise you that a freshly picked apricot still warm from the sun tastes absolutely nothing like those that you buy in the shops! In any case remember that apricots are good for you and that is a very real excuse for growing at least one tree!

You can use the rootstock ‘St. Julien A’ for growing apricots but the new rootstock ‘Krymsk 86’ has proven to be a much better option. Apricots are usually grown as bushes in the warmest areas of the country or as fans against a warm wall in cooler areas. I grow apricots as cordons but this does require more management than growing as bushes and fans.

It would be untrue to say that growing apricots is very easy as they do seem to be a little choosy about where they will succeed – I have known some gardeners to have absolutely no success but others in the same locality to do very well indeed. But I suppose that is one of the joys of gardening – never being quite sure what results you will get!

Although apricots are often closely linked to peaches they are very similar in growing habit to plums and therefore they should be treated in the same way. The most important fact to understand about apricots is to make sure that you do not prune them unless the sap is rising. This means that they are out of bounds to any form of pruning between mid-September and mid-February – the prime reason for this being that like plums, apricots are very susceptible to the virus Silverleaf and once this is within the tree it is pretty well doomed. By only pruning when the sap is moving will help ensure that any disease trying to enter the tree will be forced out by the sap.

Apricots tend to be the earliest of fruits to flower in the garden – often earlier than plums and peaches – which means that it is best to grow them in a sheltered position and away from frost pockets if at all possible or be prepared to throw fleece, old net curtains or the like over them when frost is forecast. This is easily done with cordons and with smaller bushes and fans. Naturally fans grown against warm walls are less likely to suffer from frost damage but on very cold nights I would nevertheless suggest that some protection is given.

Apricots are generally self-fertile but cropping can be considerably improved by protecting the blossom from frost as I mentioned earlier and undertaking a little hand pollination. This is helpful because at the time of the year that apricots flower many insects are still not flying and therefore little natural pollination occurs. Traditionally a rabbit’s tail is used but I prefer to suggest a small, soft artist’s brush which is simply used to lightly touch all of the flowers when the pollen is running and this is usually considered to be around midday. Undertake this hand pollination every day until flowering is over. Of course, if you are in colder parts and growing under glass or polythene the only pollination available will be by hand and so it is vital that you undertake the task as I have described.

If you are lucky enough to have an apricot tree that sets a good crop you are going to have to thin or you will get a crop of small fruits or even worse they may all drop off the tree! I suggest that you thin in two stages, the first of these being when the fruitlets are a little larger than a pea. At this stage thin to around 1 inch (25mm) apart – you may also get a little natural fruit drop at this time as well. The second stage for thinning is when the fruitlets are around the size of a hazelnut. Thin at this stage to around 2 to 3 inches (50 – 75mm) apart and leave only single fruits.

Feeding the trees on a yearly basis will help build up the trees and I use a large handful of blood, fish and bone every February, well pricked into the soil. Alternatively you can use Fruit Feed. Watering may be necessary in dry seasons – particularly in fans grown against a wall where it can be very dry.

Make sure that you let the fruits ripen on the tree as they will not develop any further flavour when picked which means that prematurely picked fruits will never develop their true ‘apricot’ flavour. When picking do not allow the stalks to pull away from the fruit as this can cause rapid decay.

Bacterial Canker rarely seems to affect apricots and it can often be eradicated if spotted early in its life. As soon as cankered branches are noted they should be removed and burnt, if possible with the wounds being given a protection of Vaseline or grease. Small areas of canker can be cut out, particularly if they are on the main stem, and the wounds protected.

Dieback occurs every now and again and can affect large parts of a tree if not spotted at an early stage. Whilst some small dieback of parts of branches seems to occur naturally – and can be quickly dealt with by removal of the affected part – large scale dieback is usually caused by disease entering an open wound. This can be avoided by not pruning in winter and by treating larger pruning cuts with Vaseline or grease. If a branch or part of a branch is broken off during the winter months by winds, birds sitting on them or general carelessness, quickly tidy up the wound to prevent any disease entering the tree’s system and again treat with Vaseline or grease. 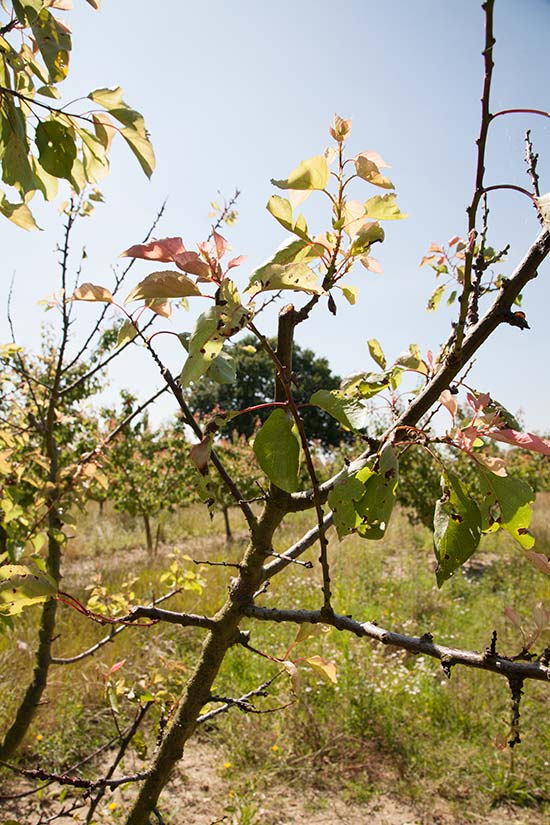 Although apricots can be susceptible to the diseases noted above trees grown and looked after well rarely suffer from them. In the majority of cases if the disease enters the tree’s system and survives there it is because of poor management – pruning at the wrong time of the year, not noticing broken branches and allowing the tree to become weak due to the lack of essential nutrients. Pest wise there is little to cause severe damage apart from the plum fruit moth which can very occasionally attack apricots. It is the caterpillars which do the damage and they look like reddish maggots which can be found around the stone when the fruit is cut open. Fortunately, the organic plum fruit moth trap which is pheromone based (similar to the codling moth trap used in apple trees) will give a good control against these unwelcome visitors.

There are a number of apricot cultivars available but only a few are really suitable for growing in gardens. Interestingly a number of recently introduced apricots are beginning to come onto the market and the first of these is a cultivar by the name of Tomcot. This variety has already proved so good in trials that a number of commercial plantings have been made and apparently proving to be popular as it is so heavy cropping. Many growers find this variety to be very reliable and it is considered by some to be one of the best for the garden because it produces an abundance of flowers which cannot fail to give a good crop. The fruits are orange with a good red flush, very large in size with a very strong apricot flavour.

Flavorcot is another recently introduced cultivar which is equally considered to be good for the garden or allotment and is every bit as good as Tomcot. It is another heavy cropping variety and is highly recommended. The fruits are large in size, orange with a red blush and have sweet orange flesh.

Golden Glow is a reliable apricot, found in the UK. It is very hardy and will crop well as a free standing tree if a wall or fence is not available. The fruits should be ready in early August.

Orange Summer is a new, heavy cropping variety which will produce, large good looking fruits with a good aromatic flavour. It is a very useful apricot as it ripens much later than most other varieties (late August) and the fruits will hang on the tree for several weeks unlike other varieties which tend to fall once they have ripened.

Some of the ‘older’ cultivars can do very well in the garden or allotment and should be considered. Indeed, I grow and prefer the cultivar Moorpark, which is perhaps the best known of the ‘older’ apricots and probably the most widely planted apricot at the present time. The fruit can be quite large and round, yellowish in colour with a brownish red flush. When grown in good sunlight the fruits can look very attractive indeed. The flesh is yellow/orange and is juicy, sweet and rich. It is a fairly late cropping apricot often not ripening until late August. Well worth growing!

Alfred is another fairly well known cultivar and is a little less prone to dieback than some other apricot cultivars. The fruits are a little smaller than Moorpark but this is compensated by its outstanding flavour which is particularly well developed in the warmest seasons. The fruits are fairly orange in colour – more like the traditional apricot colour – and they often develop a reddish flush. This cultivar ripens fairly early – usually around late July/early August.

New Large Early is less well known but well worth growing for it’s early ripening – often from early July onwards in the warmest parts of the country. The fruits are large and the quality is very good considering its early season. The fruits tend to be oval and the colour could be described as pale apricot. The flesh is orange/yellow and is very soft and juicy. The fruits unfortunately will not really store so are best eaten direct from the tree – not a real hardship considering its flavour!

Finally, for something different you could grow an Aprium which is an apricot/plum hybrid. The fruits resemble apricots and are easier to grow than some apricot varieties. Cot ‘n’ Candy is the most widely available variety.