Growing top fruit, particularly apples and pears, is a particular joy and this can easily be done at home or in the allotment by using a combination of cordons, espaliers or stepovers. However, if room is available, why not consider the more traditional approach of an orchard of apples and pears using semi-dwarfing rootstocks? By planting such trees a fair distance apart – say 3m (10ft) – you will be able to have grass pathways with the promise of picnicking under the trees in years to come! Using the rootstock M26 for apples and Quince A for pears, trees can be kept to a maximum height of around – 2.4-3.6m (8-12ft) and this is exactly what I have done in three ‘community’ orchards that I have designed and planted. I reckon that if you can find space for at least five trees you have yourself an orchard!

But before you rush out and buy some trees there are some points worth considering. Ideally the site should have a free draining soil, although you can improve this by double digging your planting area adding plenty of compost at the bottom. In very wet sites you can plant trees on a ‘mound’ of compost and topsoil. If you have a slightly sloping site so much the better as it will drain very well. Even better is the site having a south or south west facing aspect but this is asking a lot and to be honest you will still be able to grow well in all but the shadiest locations. Your site also needs to offer some protection from frost or you may find that early flowering varieties cannot be grown. A perfect location again is planting on a slope so that frost can roll away and not linger but if this is not possible you can grow some late flowering varieties of apple, covering them with fleece on the coldest nights.

As I noted earlier, orchards will be grassed over with the trees planted within this area. This can either be achieved by digging out holes in existing grassland no less than 1m (3ft 3in) in diameter or by clearing a whole area, planting the trees and then sowing grass seed. Either method is perfectly acceptable but always keep 1m of soil around the trees completely clear. This is important for three major reasons – to prevent competition for nutrients and water and to not provide a shelter for pests and diseases. You will need to keep the trees staked for all of their lives, as their eventual height and thereby branch network and fruiting ability, can cause a tree to easily topple over in the lightest of winds particularly in early autumn when a considerable amount of fruit could still be on the trees.

Whichever method you use to plant, it is important that you prepare the ground as well as you would plant anything else. If you are planting in bare land double digging is ideal but if you are using planting holes in grass still dig down two spade depths incorporating compost into the bottom layer. If planting on chalk remove as much as possible and add additional topsoil and if planting in sandy soil incorporate an additional amount of compost and well rotted manure to give the soil some bulk. When planting use blood, fish and bone and rootgrow™ (mycorrhizal fungi) to help maximize root development.

So what varieties to grow? As I am writing about a traditional orchard I will highlight some of the best heritage varieties to grow and add in a couple of modern varieties as well. The following are dessert apples, cooking apples and dessert pears that I thoroughly recommend:

Beauty of Bath is a very early apple and has been known since 1864. It is heavy cropping but the fruits must be eaten straight from the tree as the won’t store. This variety is ideal for wetter parts of the UK.

Blenheim Orange is a famous variety that was discovered in Oxfordshire in the mid eighteenth century. It is a very valuable variety in many senses in that some fruits grow very large and can be used for cooking and smaller fruits will ripen slowly and be ready for Christmas. Its main drawback is that it is largely biennial but it is worth growing in an orchard.

Charles Ross produces a mixture of small fruits which ripen in early September and are perfect for eating and large fruits which are just right for baking. This variety, which was raised in the late nineteenth century, was a favourite of the Victorians as the highly coloured apples were much treasured in the fruit bowl. 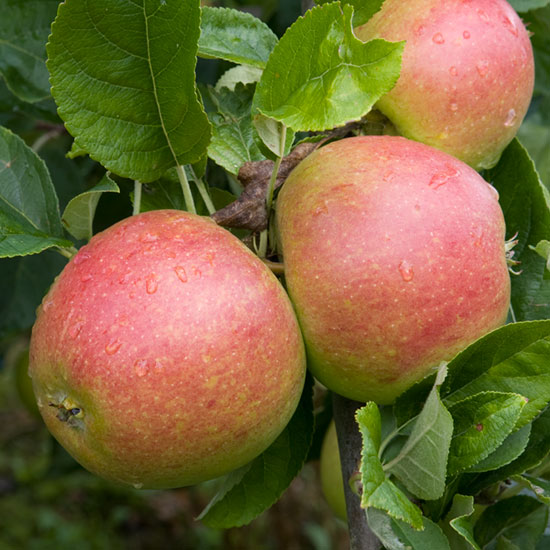 Discovery is one of the finest early dessert apples and ideal for growing as an orchard tree as it is a partial tip bearer. It is a very easy apple to grow and regularly bears heavy crops. Although only introduced in the 1950’s (and thereby my first ‘modern’ apple) this variety takes its place well and truly in a traditional orchard!

Egremont Russet is a fine apple raised in 1872 and should have a place in any orchard if a russet apple is required. Amongst all of the russet apples this variety is the easiest to grow by far and therefore quite rightly known as the king of the russets!

Ellison’s Orange was bred at the turn of the twentieth century and despite its tendency to biennial fruiting, is well worth growing for its wonderful flavour alone. If you like aniseed this has to be the variety for you!

Fiesta is my second ‘modern’ variety but one which has a heritage back to the wonderful Cox’s Orange Pippin. Unfortunately Cox is a difficult variety to grow in the garden but Fiesta has the Cox taste right through it and the fruits can store well into the New Year.

James Grieve is another fine early apple which was raised in Scotland in the late nineteenth century. Due to its area of birth this variety is fairly frost hardy and its blossom can survive unharmed on fairly frosty nights. Although it is not a true dual purpose apple, fruits picked early are ideal for cooking.

Laxton’s Fortune is one of the finest early September varieties and very easy to grow. It was raised in 1904 and will grow in most parts of the UK. Although fairly biennial in cropping this apple must always be considered in an orchard planting.

Lord Lambourne was raised at the turn of the twentieth century and to my mind is one of the finest dessert apples. It is a very reliable cropper and the fruits will store well until the turn of the year. This variety has to be the first choice for any orchard.

Ribston Pippin is one of the parents of Cox’s Orange Pippin, originating from Yorkshire in the early 18th century. Although a fairly shy cropping variety it is much easier to grow than Cox. It’s flavour is superb and it is ideal for eating at Christmas.

Worcester Pearmain was raised in 1873 and is another ideal orchard apple as it is a tip bearing variety. It is fairly early cropping but unlike many other early apple varieties it can be stored for a few weeks once picked. At its best this variety has a strawberry flavour.

Arthur Turner was raised in 1912 and is one of the finest early cooking apples. Although the fruits will not store for very long, they can be cut into slices and frozen. It regularly crops well.

Grenadier has been known since the mid nineteenth century and is one of the best early cooking apples. The trees are very compact in growth and fairly resistant to scab which makes it an ideal variety for wetter parts of the UK.

Howgate Wonder was raised in the Isle of Wight in the early twentieth century and produces the largest fruits of any apple tree – just perfect for baking. This variety is a regular and reliable cropper and ideal for orchard growing. The fruits store well into the New Year.

Lord Derby was raised in 1862 and is a late season cooking apple producing large attractive green fruits which turn yellow as they ripen. The blossom is fairly tolerant of frost, which means this variety is well suited to being grown in colder parts of the UK.

Monarch was raised in the late nineteenth century and was very popular until recent times due to its lateness and its ability to store well into the New Year. This variety can be fairly resistant to scab so is well worth growing in the wetter parts of the UK.

Reverend W. Wilks was first recorded in 1904. The fruits can grow huge and look like no other apple variety as they have a pale yellow/green translucent skin. Although this variety can be very biennial, it is well worth growing for its ability to produce perfect baked apples, let alone its unique look.

Beurre Hardy was bred in France in the early part of the nineteenth century and is now grown all over Europe. This variety makes a perfect orchard tree as it is strong growing and the fruits always seem to be larger on bigger trees. The flavour of the fruits is superb but they do have to be eaten more or less off the tree.

Conference was raised in the UK in the nineteenth century and is one of the best known pears in the world. It is very reliable and can remain in a cool place for a few weeks after picking, albeit that regular checks on ripening are made.

Doyenne du Comice (or Comice as it is widely known), is probably the finest pear that can be grown in the northern hemisphere and was bred in France around 1840. It is perfect for growing in warmer areas of the UK and well worth growing if this is achievable. As an orchard tree this variety grows well and crops very well indeed.

2 thoughts on “Planting a Traditional Orchard”