Forget all of the nonsense that you hear about the difficulty of growing nuts – whether it be that they are unreliable in cropping, easily frosted or take a long time to reach bearing ability – and try and find space for a tree or two. Probably the only difficulty that you will encounter is beating the squirrels to the nuts but even if they do sneak off with a few there will be plenty left for you! I have grown nuts for years and I do absolutely nothing to my trees except occasionally trim the odd branch and they reward me with large crops every year and without fail! Even if you do not like eating nuts the trees are very decorative with cobnuts and filberts, in particular, having very attractive catkins in early spring; indeed, many trees are sold purely for decorative purposes. Incidentally, if you have never eaten nuts directly from the tree have a go because you will be amazed at the difference between ‘fresh’ nuts and those that you buy in the shops which have been picked for some time.

As both cobnuts and filberts are grown in the same way I will consider them both together. They are both very good for the garden as they produce their catkins in late January and February when the garden needs cheering up a little. These trees are known as monoecious as they produce both male and female catkins on the same tree; the male catkins being long and very good looking and the female catkins being small, red and almost unnoticeable. A particularly good feature of the catkins is that they often last up to six weeks. These catkins are wind pollinated which should never be a problem at this early flowering time and whatever you read or hear, one tree is perfectly sufficient to produce a good crop. 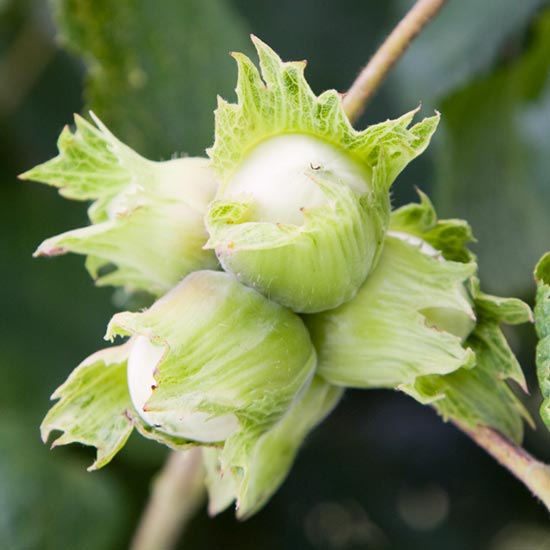 Cobnut ‘Cosford’ is one of the sweetest flavoured cobnuts.

I have read and heard that the catkins can be damaged in a hard winter but so far my trees have never failed to produce a good crop, even when the temperature has dropped to minus seven degrees centigrade – and that is pretty cold!

Cobnuts and filberts are always grown as open centred trees on their own roots and to whatever height you desire to have them. If you want them as decorative trees as well as fruit bearing trees, you may let them grow up to 4.5m (15ft) high but if you are growing them purely for fruiting keep them to a manageable height of 1.8-2.1m (6-7ft) high. Plant bare rooted trees between late November and March tying them to a small stake, which will keep them supported for a couple of years whilst the roots settle in. The majority of cobnuts and filberts will produce a good crop without a pollinator but some will require cross pollination for a good set – I suggest, therefore, that for small gardens you only select those that will set a crop by themselves.

Now comes the dreaded word pruning! But don’t worry as we have to talk about initial pruning and that is not at all difficult. Your bushes (we call them that at this stage rather than trees) will come delivered to you either as multi stemmed bushes or as single stemmed trees. In the case of multi stemmed bushes simply select a strong upright stem and cut back all of the others to ground level. Prune the remaining shoot to a bud about 30cm (12in) from the ground. This will now form the stem of your new tree and you can consider it a maiden. In future years you will prune to increase the height of the tree and to produce a branching structure. If you receive a single stemmed tree with branches cut these back about half way to a bud. Once you have your tree growing you can decide whether to grow it decoratively or for fruiting.

If you are intending to grow your tree decoratively I suggest that you only prune to remove inward growing, dead, diseased and damaged branches and let the tree grow to whatever shape you want. However, remember that the tree is growing on its own roots (which means that it will be relatively vigorous) so you will need to watch the height. If you are growing your tree purely for its crop, a pruning regime will be needed and this is not difficult. Remove any branches that are lower than 30cm (12in) from the ground to give a short trunk. Cut all the other branches back hard to around 23cm (9in) to stimulate growth and over the next two or three years thin all new growth so that around eight good branches are formed in a ‘goblet’ shape. The centre of the tree is kept open by the removal of any branches or shoots growing internally. When the tree has grown to the height that you want it to be, cut the top of each branch to a bud and this will lead to catkin bearing side shoots being formed.

Once you have formed your fruiting tree you will need to undertake some winter pruning. Strong lateral growth should be pruned to three or four buds and the main framework branches and other leaders should be pruned to maintain your required height. All of the vigorous lateral growth that you ‘brutted’ in August (see next paragraph) should be cut back to three or four buds. After that the rest is up to you! It is not difficult to keep a tree like this in shape and as I have said many times before, you have got to look at the tree, so grow whatever shape you want it to be.

Summer pruning is very different to normal pruning and is known as ‘brutting’. This must be carried out in August and involves breaking by hand all vigorous (strong growing) lateral growth of the current season by about half. These laterals are not completely broken through but left hanging until winter when they are cut off. This seemingly harsh treatment is very effective as it will considerably cut vigour without the subsequent growth caused by normal pruning during the growing season and will encourage fruit bud formation. May I suggest that you first practice ‘brutting’ on some pruned off shoots before you let yourself go on the real thing!

Fruiting brings the real fun! As I remarked earlier you are going to have a little competition from the squirrels here. The theory is that you leave the nuts on the tree until around the end of September when they ripen and you can tell when this has arrived as the husks start turning yellow. Unfortunately if you live in an area of high squirrel population this will be far too late unless you manage to erect a squirrel proof net around your tree or trees. The way I get around this is to pick a little early and this will more often than not win you the nuts. I have to be honest in that nuts picked earlier than ripeness will affect the nut’s flavour. Whilst this may be true I find that nuts picked around mid August are perfectly edible and have a jolly good flavour and I would rather be in this position than wait and let someone else harvest them for me! When you have harvested your nuts dry them out well by spreading them out in a warm place – away from mice and squirrels – and then store them somewhere fairly cool, again protected from vermin. I store my nuts in my fruit store at the bottom of the garden in small net bags and have rarely lost any during the winter.

Incidentally do try and eat a nut or two directly after they have been picked and still in their ‘green’ state – you will be amazed at the flavour. For your digestion’s sake only try a few please!

Cosford is a cobnut that produces large, oblong nuts which have a very good flavour. It is a very heavy cropping variety which means that you will need plenty of space or be prepared to keep the tree under control! It is super to see early in the year as it produces bright yellow catkins.

Kentish Cob (also known as Lambert’s Filbert) is a filbert and probably the most commonly planted nut in Britain today. It is a very heavy cropping variety and is moderately vigorous. I recommend this variety for most gardens.

Purple Filbert is a filbert that is worth growing for its decorative features alone as the foliage is rich purple and the catkins are long and dark red! These are of good quality and are unsurprisingly red as well. Unfortunately it is not a heavy cropper but does it matter when you have a tree in your garden like this? 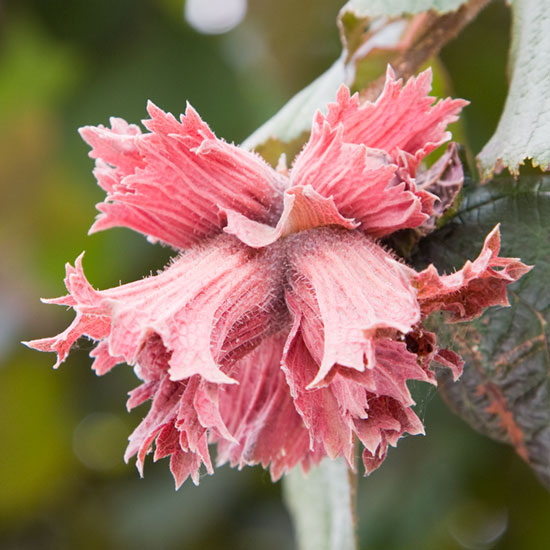 The ‘Purple Filbert’ is grown as much for its ornamental value as for its nut production.