The star of Pomona Fruits Spring 2016 catalogue must surely be the newly introduced dwarf raspberry ‘Ruby Beauty’. This new variety is set to be of great interest to all raspberry lovers with limited garden space as it is the first time that a dwarf plant has been offered.

Pomona Fruits Director, Ming Yang is excited about the future for ‘Ruby Beauty’:

“Every so often a new variety comes along that you know is going to be in great demand. The plant has so many great features so we are delighted to be adding it to our range of patio fruits.”

Despite its miniature stature – only 1m (3ft 3in) tall when fully mature – each bush is expected to deliver an annual yield of 1.5kg (over 3lb) of succulent fruit. It is a multi-branching plant and can be grown with equal success in soil or containers. Early season cropping starts in June and as a thornless variety picking should be pain-free. Because of its size it is also a simple matter to net the whole bush giving maximum protection from birds. 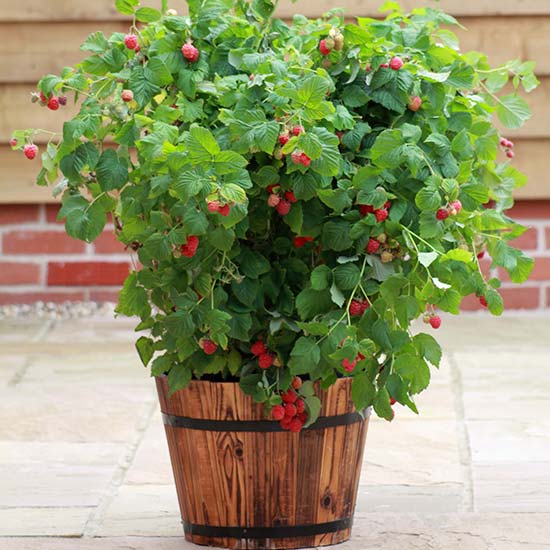 If ‘Ruby Beauty’ is the star, the supporting cast of the new catalogue are equally impressive.

‘Core Blimey’ is a new self-fertile, delicious apple variety that was developed specifically for the London Urban Orchard Project, a charity that promotes cultivation of orchard and fruit trees in London (the name ‘Core Blimey’ is a suitably apt reminder of this fact). Bred to be strong enough to resist the worst of London’s environment as well as other diseases means that Core Blimey will positively thrive anywhere in the UK. The fruit colouring is bright and cheerful whilst the crisp and juicy flavour are strongly reminiscent of a Cox. The fruits are ready for picking in October. It can be ordered as a tree or a cordon. 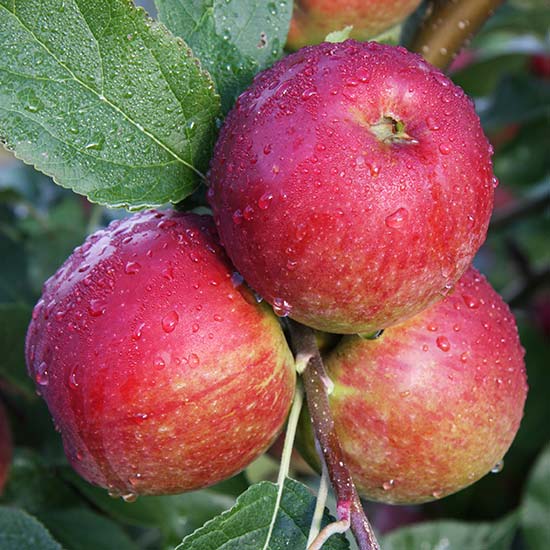 ‘Meteor Korai’ is a new self-fertile ‘Duke’ style cherry that originates from Hungary and has now been brought to our shores after further development in the Czech Republic. Of great interest is that it will tolerate shade even to the point where it can be grown on a north facing wall. It also offers good resistance against disease and splitting and its sweet/sour taste makes it suitable for both cooking and fresh eating. The tree is of compact growth and is is very heavy cropping through late June to early July. 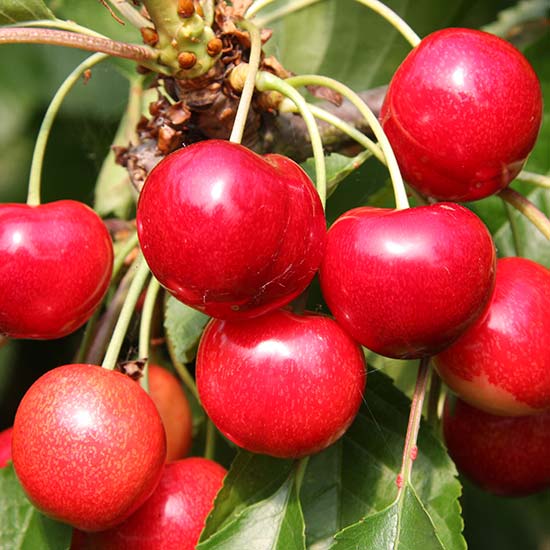 Gardeners who have made Sibley’s Patio Trees such a firm favourite will be delighted to learn that two new varieties are now available.

‘Sibley’s Patio Victoria Plum’ is a self-fertile patio version of the UK’s favourite plum; it has been grafted onto VVA1 dwarﬁng rootstock using special grafting techniques to keep the tree even more compact. From early age the plant carries a wonderful display of white spring blossom that is followed by heavy yields of delicious plums in the late summer. A mature tree will reach a maximum height of 1.2m (4ft). ‘Sibley’s Patio Almond’ is also self-fertile and displays an attractive pink blossom throughout Spring. The heavy crop matures during Summer and is ready for picking from late September through October. 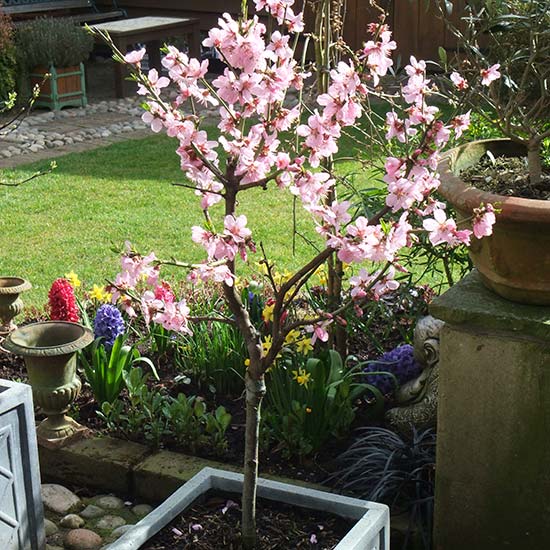 For growers wanting something a little different the newly introduced ‘Pink Candy’ may be the perfect answer. This self-fertile plum-apricot hybrid is genetically 75% plum and 25% apricot. It produces a heavy crop of vibrantly coloured fruit which is sweet and juicy with tropical fruit overtones. It is ready for picking in September. 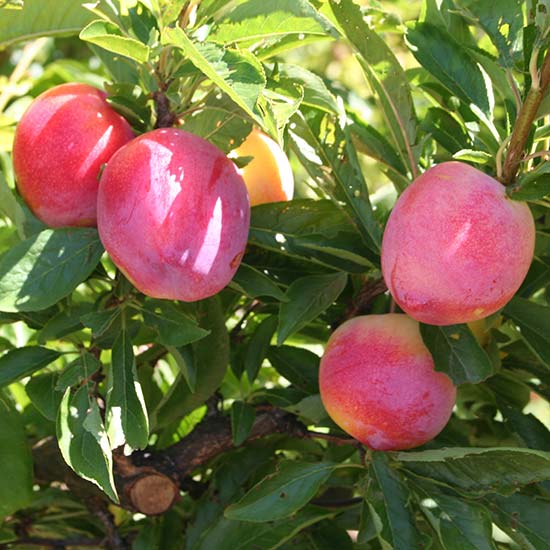 ‘Lacrima’ is yet another ‘world first’ available from Pomona Fruits. The world’s ﬁrst edible weeping peach is a most attractive tree. Its sought-after cascading habit combines with stunning displays of Spring blossom that are followed by heavy crops of sweet, juicy yellow peaches in the late summer. Due to it’s cascading habit which provides shade within the tree, ripening is uneven making for a much longer picking season. ‘Lacrima’ is self-fertile. ‘Vanessa’ is a new red seedless grape bred in Canada and perfectly suited to growing in the UK. It is very hardy and will tolerate dry summers and cooler climates alike. The fruit quality is excellent with a firm skin and crisp texture. The flavour is a delightful combination of mild yet fruity taste. Will ripen in a cold greenhouse and also stores well. Orders placed with Pomona Fruits before 31st March 2016 for ‘Ruby Beauty’ and many other selected varieties enjoy a 10% discount.

1 thought on “Round-Up of New Varieties for This Season”